Gas as a Weapon

Although it is generally assumed that the first gas attack was made on 22 April 1915 on the Western Front, this was not the first time chemists achieved an effect in the field. Tear-gas, for example, was already familiar. At Neuve-Chapelle on 27 October 1914 the Germans had fired several hundred 105 mm howitzer shells filled with a gas called dianisidine. In March 1915 the French were bombarded with tear-gas at Nieuport. In early 1915 a German tear-gas attack took place near the Polish village of Bolimow. The cold weather caused the gas to freeze, rendering it ineffective. The Russian army informed its allies of this attack.

Not only Germany prepared for a chemical war. Other countries had conducted experiments and built up large stockpiles. In August 1914 the French army went to war with around 30,000 shells containing a bromide-based concoction. Shortly after war broke out, the Germans got hold of a letter in which the French high command warned its troops about artillery shells that would release vapours after an explosion, irritating the eyes, nose and throat. They called them turpinite shells, since the gas had been invented by the Paris-based chemist and explosives expert Eugène Turpin, who in 1884 had discovered melinite that gave the world its first explosive shells. During the First World War, melinite was replaced initially by trinitrotoluene (TNT) and later by a mixture of TNT and ammonium nitrate known as amatol.

More and more German soldiers were admitted to hospital with symptoms of poisoning. During the battle of Argonne, turpinite drove the German army to despair. In September 1914 both the British and the French had bought up supplies of chlorine gas and the French especially had considerable stocks of gas munitions by the time of the German gas attack in April the following year.

German chemists were encouraged to put their knowledge to practical military use. A Kriegschemische Abteilung (Chemical Warfare Department) was established under the leadership of a prominent chemist at Berlin’s Kaiser Wilhelm Institute for Physical Chemistry, Fritz Haber.

Haber believed that the use of poison gas in large quantities within a small area would enable the Germans to regain the war initiative. After the war, in 1919, he received the Nobel Prize for Chemistry.

In late 1914, the Germans became determined to shorten the Ypres front. The Allied troops however were unaware of the imminent attack.

A German deserter told the French army in detail of a forthcoming gas attack. He even showed them the small sack given to the German soldiers to protect them from the gas.  The information was passed on to the British and Canadian units and to the French high command. The French commander of the Détachement d’Armée de Belgique (Army Detachment of Belgium) - General Putz – refused to believe it.  On 16 April 1915 information came from Belgian Army sources reading as follows: “Use of poison gas. Germans have manufactured 20,000 mouth protectors in Ghent … The men of the 26th  Ersatz Corps have recently received, at Roulers, special instruction to learn the handling of gas cylinders …”

The British took the story seriously and conducted several reconnaissance flights in their sector, with no results.

On 17 April the Germans started bombing Ypres with heavy artillery. On 19 April, the 42 cm Dicke Bertha joined in the bombardment. The next day, the German army was ready to launch its first gas attack and started to wait for a favourable wind.

On 22 April 1915, at half past five in the afternoon, the Germans released 168 tons of chlorine gas from 5,730 cylinders. It formed a yellow-green cloud six kilometres wide and 900 meters deep that blew towards the Allied positions between Steenstrate and Poelcapelle.

The gas hit several British, French and Belgian units. The first messages came down from the front trenches. The French medical officer Octave Bueliard wrote of the effects of chlorine:

“… a sudden tumult of explosions and musket fire, whole regiments flee the trenches … Many fall to the ground. Their bodies jolt with spastic convulsions. Everyone coughs, vomits, spits blood … the air is filled with a horrible stench. The panic is enormous, the wounded are dragged along … the dying are trampled by those fleeing …”

The breach in the Allied line was far greater than the Germans had been expecting and they were not able to fully exploit it and take Ypres, as they were soon forced back by the counterattacks of the British, Canadian, Belgian and French troops.

As from 1916 poison gas shells were fired at the enemy positions. Not infrequently, however, the wind blew back the gas cloud towards one’s own positions.

New types of gas were discovered and tested at the front. Of all the various types, 38 were used on a significant scale: 12 kinds of tear-gas, 15 kinds of suffocating gas, 3 blood-poisoning gases, 4 gases that burned the skin and 4 that affected the stomach. The most widely reported and effective gas of the First World War was mustard gas, better known under its French name Yperite. It was introduced by Germany in July 1917 prior to the Third Battle of Ypres. The Germans marked their shells yellow for mustard gas and green for chlorine and phosgene; hence they called the new gas Gelbkreuz (Yellow Cross).

Gas became more and more powerful. It could be lethal even in small doses.  The methods used to protect against gas were also increasingly effective, although working in a trench while wearing a mask generally proved difficult and tiring.

During the war a total of 136,200 tons of chemicals were released into the atmosphere. Even the small Belgian army, which was not subjected to severe gas attacks until mid-1917, and used gas itself only from late October that year, had fired between 190,000 and 260,000 gas shells by the end of the war.

In 1918 there was a considerable escalation in the gas war. At least one in every five German shells was filled with gas. All countries together produced a total of 190,000 tons of gas.

To this day, gas shells are still being dug up in the fields of West Flanders. The Explosive Ordnance Disposal Service of the Belgian Defence (DOVO, Dienst voor Opruiming en Vernietiging van Ontploffingstuigen) collects the shells on the spot. The munitions are stored and destroyed in Poelkapelle.  Before the end of 2016 the base in Poelkapelle will have a special new dismantling facility, making it possible to destroy any toxic munitions in a safe, environmentally friendly and responsible way. 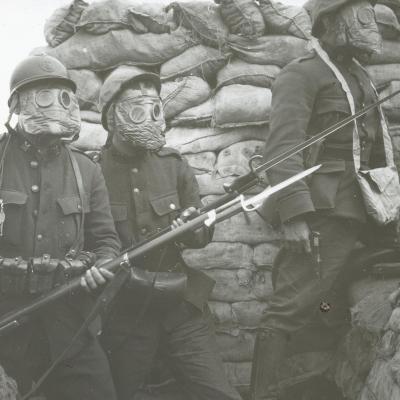 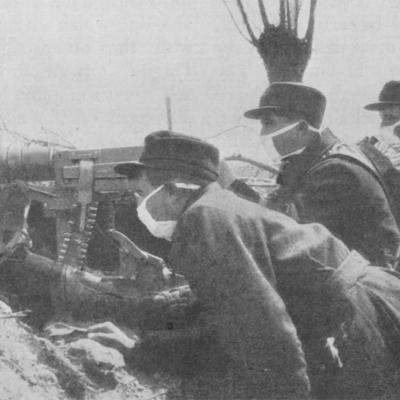 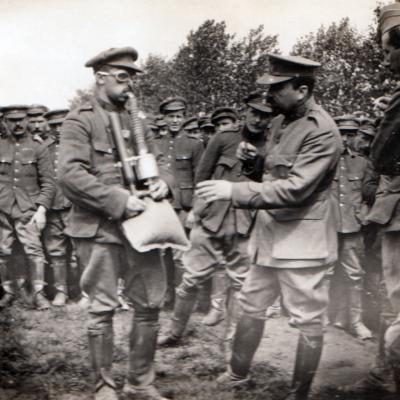 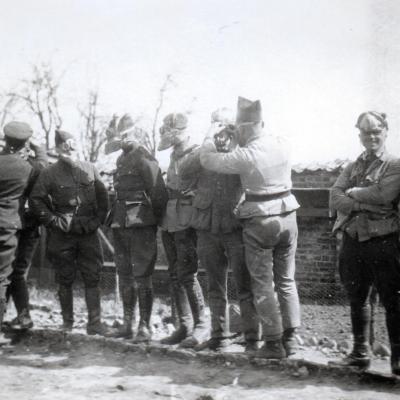 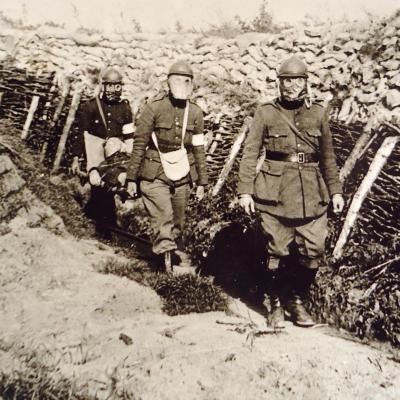 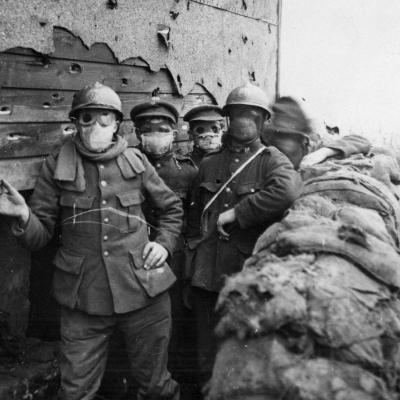