The Belgian army had not been fully deployed since the Franco-Prussian War of 1870. Between 1870 and 1914 great technological advances were made in artillery. When it comes to tactics, however, not all armies made an equally big leap forward. Changes were often limited to methodical adjustments through improved means. This technological breakthrough was the result of modern steel industry which led to a wide range of new technologies.

King Leopold II signed the new conscription law on his deathbed. Parliament however waited until August 1913 to start voting on the necessary laws. In early 1914, the Belgian artillery was still busy with getting itself organized. 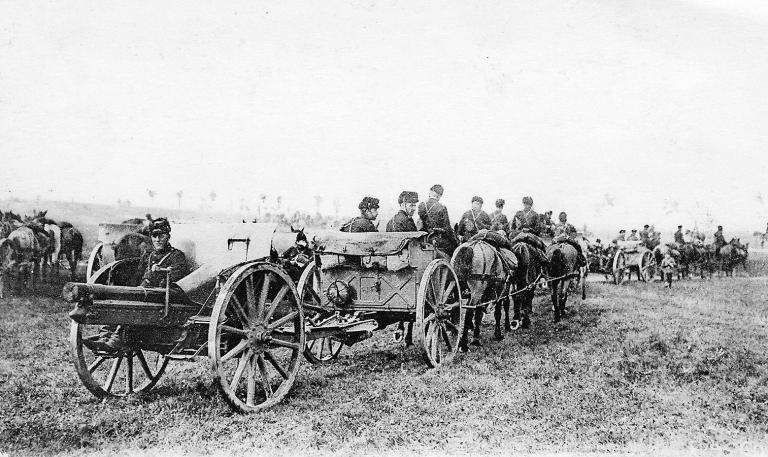 As from 31 July 1914 the Belgian army, squashed up between the French and the Prussians, took up defensive positions around Namur and Liège, while its field army was waiting for an attack near the river Gete. The artillery comprised the garrison artillery and the field artillery. The garrison artillery (assisted by the garrison infantry) was in charge of the chain of forts at Namur, Liège and Antwerp. The field artillery was equipped with horse-drawn 75mm quick-firing guns. The Belgian field army prepared to bear the brunt of the imminent assault. 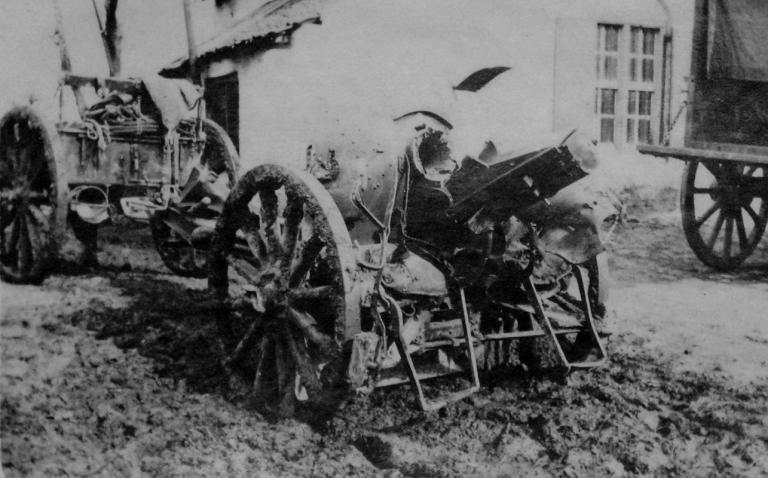 10.5cm gun of type Krupp used by the Belgian army

The armies soon experienced the massive firepower of the new artillery. The 19th century technical revolution, however, did not lead to tactical innovation. Except for a few subfields, the existing military techniques were not much improved by the new technology. In the late 19th century, the German military command decided to build a gun capable of smashing modern fortifications. As the gun itself weighed tons, horses alone could not pull this so-called Big Bertha. To increase its mobility, German engineers used locomotives and railway cars.

Thanks to Big Bertha, the besieging troops had a serious advantage over the fortress troops. The annihilating blows of the 42 cm and 30.5 cm shells broke the resistance of the forts. This triumph of new technology made the forts fell one after another. The first to fall were the ring forts of the Meuse. The advancing Prussians made their main war effort on that route. 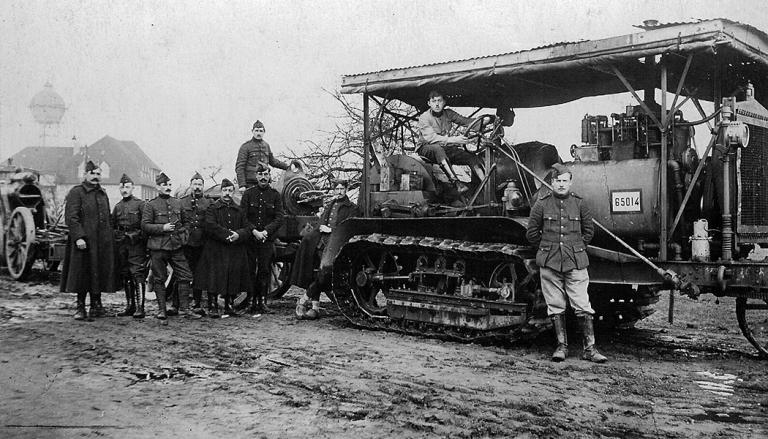 Antwerp was the next target. Once it became clear that the “National Redoubt” could not guarantee the survival of the Belgian institutions, the forts were given up. The city was evacuated a few days after General von Beseler opened his offensive. This nearly meant the end of the garrison artillery.

The Belgian army made a hasty retreat to the Yser. There the German advance was stopped. In the next four years a new defensive fortification line was built, which stretched from the North Sea coast to the Swiss Alps. 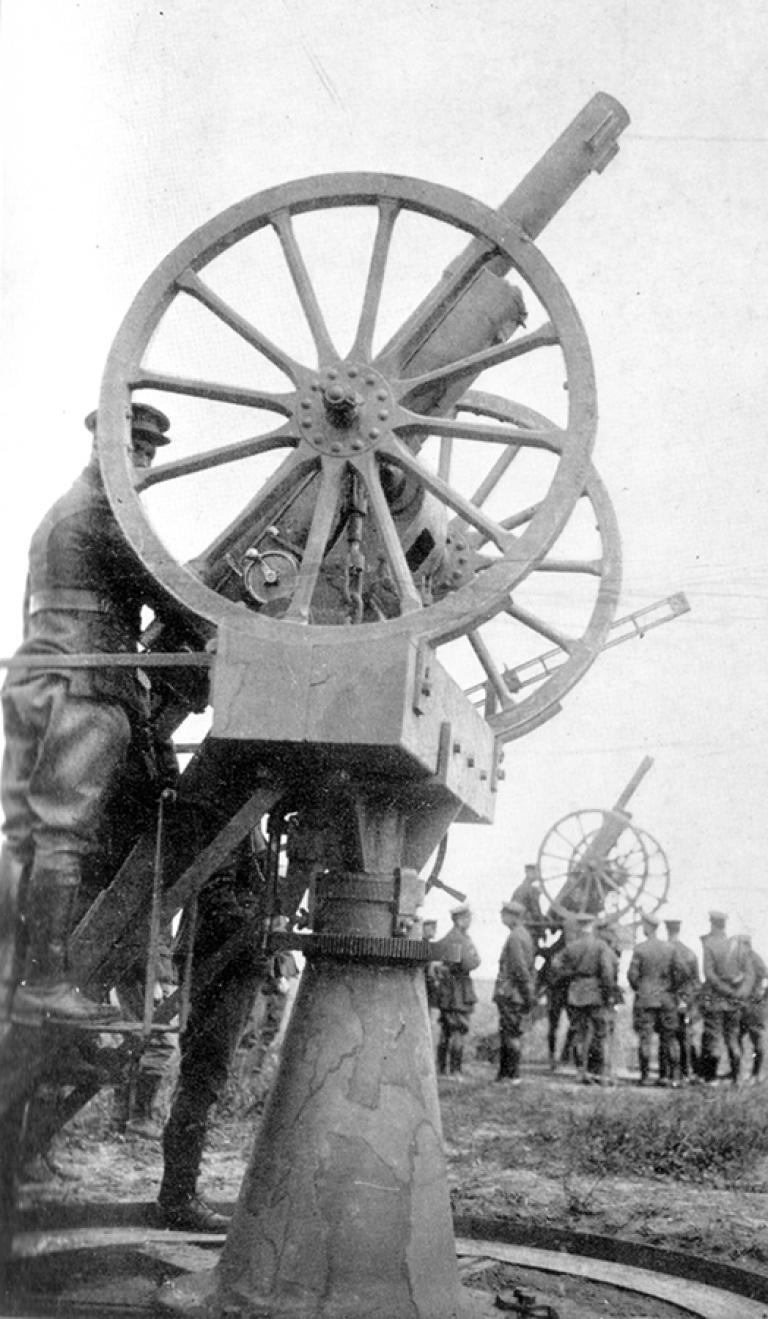 Schneider gun of type C75 used as an anti-aircraft gun

All mobile and still usable ‘light’ pieces of artillery were towed behind the Yser. However, those pieces of artillery were meant to follow and support a field army, rather than to be used in a war of position. A new kind of artillery was therefore developed in the trenches of World War One. Trench artillery made it possible to fire at high angles against the enemy trenches. Its mortars are known as the ‘Van Deuren mortar’, the ‘Delattre mortar/grenade launcher’ and the 75mm ‘Schneider mortar’.

Aerial threats were also a danger. In the summer of 1914, our cities were first bombed by Zeppelins. The Zeppelins were bombarded by improvised anti-aircraft artillery with field guns. Later in the war, observation balloons and planes were bombarded by C75 SP Schneiders.

Throughout the war, heavier pieces of artillery were added to the Belgian arsenal. Most of the 105, 120 and even 150 or 155mm guns, howitzers and mortars were made in France. It was a period of technical progress in every field. Improved ammunition increased the firepower and range of artillery. Numerous assaults aborted in the shell craters made by one’s own firepower on enemy territory. Only the infantry managed to move forward, while the artillery got stuck in its own bomb craters.

As the heavy pieces of artillery bogged down, other traction engines were necessary. The first artillery tractors and trucks appeared in 1915. 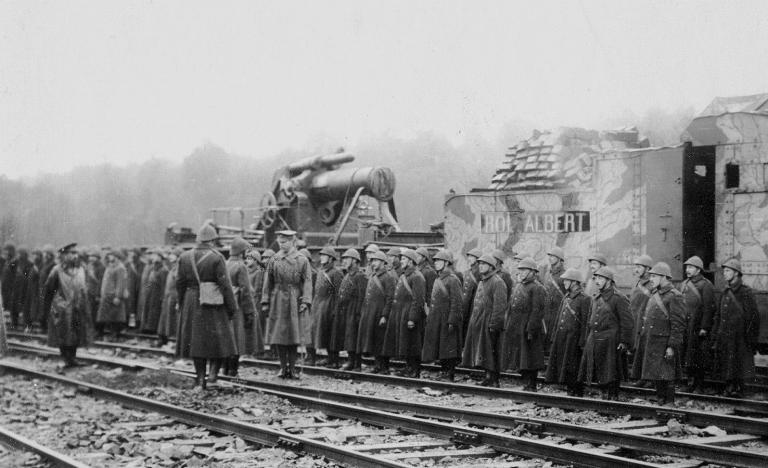 For more than 3 years, every assault on this terrain resulted in an extremely high number of young lives taken far too early. Finally, the British came up with a solution. They built a caterpillar-tracked vehicle for difficult terrain, which also protected the crew from fire. This rolling fortification was called a Tank by the British. The French called it “l‘Artillerie spéciale” because it provided mobile fire support for the attacking infantry.

With thanks to the Gunfire Museum Brasschaat and Colonel o.r. Roger Lothaire.

The Gunfire Museum in Brasschaat is worth a visit: